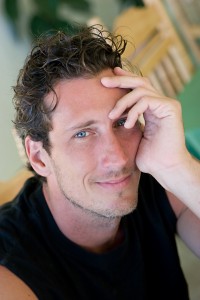 Thomas C. Dunn was born in Nesconset, New York, and graduated from UCLA with a BA in creative writing. He has since focused on poetry, plays, and screenplays. He’s also directed several socially relevant documentaries. In 2007, he made his narrative, feature film directorial debut with the psychological thriller, ‘The Ungodly’, starring Wes Bentley and Mark Borkowski. He has worked on multiple film projects internationally, collaborating with production teams in Spain, the UK, Greece, Georgia and Azerbaijan.

His plays have been performed across the US. His one-act, ‘The Thread Men’, won the 33rd annual Samuel French Off-Off Broadway Short Play Festival and a monologue from the piece was published in ‘Exceptional Monologues for Men and Women 2’.

He’s excited to be partnering with Lorenzo Pescini on his multi-media piece, ‘On the way to Venus.’

More of his poems can be found below:

I will have dinner with surrender tonight
The main course, of course, is reality
We will hold flint between our fingers
And strike at each other
The first spark is a deliverance of the dark
Mind over tatters
Dresses, skins, sins –
Like gas flowing in wind
These are our flags
Snapping at half-mast
I am building my destiny with matchsticks 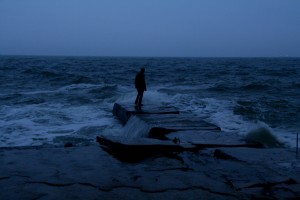 Then prances in the grooves, along the curves,
Among the strokes, across their lips,
Sucking, trying to draw nourishment
Senseless
Art and women, pronounced in silence
Will not now yield, but tighten
Before a mouth discharging kisses
Intermittently with flight

When the wings break off
Under gravity’s smooth choreography
Like rose petals gasping
Then disintegrating, soil pores

Art will choose graces from the death,
The fly will transcend the glass
And the artist can turn from it all
— a girl at puberty, sighing, “this is creation…”

You’ve broken into our embraces
Conscious that you can seize that which is not given
‘Perhaps weakness receives too much emphasis’
You announce, hoping to conceal the frailty within

Us. ‘You and I,’ you repeat, somewhat disappointed
That even in name, there would be a separation,
A distance that walls of skin cannot conjoin
Two prayers before a god with strength to answer one

There is the past; to be precise, there is your past
At times desperate, disparate from the silence
That coats our nights, and tucks your distressed
Memories in. And I am staring at your innocence.

The bed is soaked. Three feet from the wall.
An overturned vodka bottle has crawled to the window
And you’ve fallen asleep, legs spread in denial
Of nothing. Details of the room are swallowed in shadow.

Eclipsed. But before this. You refuse to look away.
Dark eyes hovering above me like ghosts
Begging to be understood then let go. I blame
Our bones. For our spirits have always known

Differences do not divide us
Cut from trust, we heal again by the same touch
That has stripped us of our belief in promises
Slowly, the surrendering that reaching is enough

To release you and I until you and I
Are one. Bare mattress, crumpled sheets, street lamps drone…
I’m trying to return; in my mind, I am by your side
All the times you’ve cried, distraught that you were alone

Or were not. I straighten your legs, rest my head between
Your breasts. Breathe within your beauty. ‘Reckless,’
I whisper to you, ‘to still love like this…’ And as you dream,
Hearing only ‘love,’ you move forcefully into my kiss