SAVE OUR BEARS FROM CRUELTY AND BARBARISM 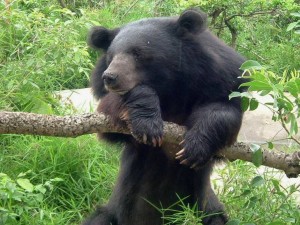 In parts of Asia, an estimated 14,000+ sweet, sensitive and endangered moon bears (named for the crescent shaped stripe across their chests) are held captive in small cages on farms while being milked for their bile. The bile is used in traditional Asian medicine, despite the existence of many herbal alternatives. These beautiful bears are usually kept in “crush” cages, lacking even the space to turn around, frequently with (often rusty) catheters or sometimes just open holes in their abdomens. They are incarcerated in this way, undergoing suffering extraordinary emotional and physical pain, for as long as thirty years. International animal 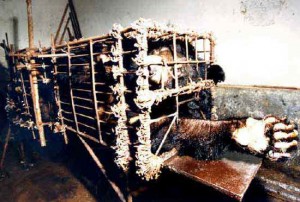 welfare nonprofit organization Animals Asia works with government officials and bear farmers to rescue the bears, who are brought to our organization’s two expansive Moon Bear Rescue Centers (in China and Vietnam). There they have the opportunity to live out the rest of their lives in peace, with room to romp, water to splash in, and many treats to munch on. 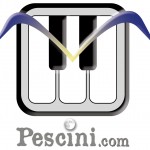 Lorenzo Pescini, an Italian piano composer who particulary loves bears, is promoting this project: “A CD for the Moon Bear“.

Throughout the year 2012 Lorenzo will donate to the Animals Asia Foundation 3 Euros  for each cd sold at the price of 20 Euros (shipping included),  purchased to those who will order indicating the project “A CD for the Moon Bear.” .

You can choose your CD between these albums:

“On the way to Venus”
http://www.youtube.com/watch?v=6WsyES9siMo

Ordering them or request information about this project is easy: send a mail to lorenzo@pescini.comwriting: “A CD for the Moon Bear”.

Thanks for your help!